Surely a Cake Is In Order

That kind of celebration is exactly what’s in store for us at RLE Technologies this year.

2014 is going to be big year for us as we commemorate 30 years in business with continued growth in our company and our products. We’ve got some big things in the works and the arrival of our 30th birthday seems like a good time to share our excitement.

But, as ever, to truly understand where we’re going in the future, we should first take a look to the past.

And as with so many good things, the story of RLE Technologies starts with people.

The year 1984 – contrary to George Orwell’s bleak dystopian predictions – was a year of bright beginnings for the Raymond family.

In these early days of the microprocessor, Don Raymond Jr. was working for Ball Aerospace, performing complex operations on equipment for satellites in a lab sealed to keep the dust out of the sensitive systems.

His years at Ball Aerospace had taught Don a number of valuable things that he was about to carry forward into the future. Chief among them were these three things (and keep an eye out as the story continues, because they’ll underly pretty much everything that comes next):

And, like so many entrepreneurs, Don saw a need and decided to fill it.

Don Jr. teamed up with his father (Don Raymond Sr.) and started up Raymond Electronics in the second bedroom of Raymond Sr.’s house. The Raymonds were intent on perfecting the design for reliable sensors.

In those early days, the whole family, husbands and wives, pitched in to build the products, all hands on deck in support of a vision of things to come.

Eventually they brought brother-in-law Roy Lae into the fold to complete the team. Raymond Electronics became Raymond and Lae Engineering.

Which eventually was shortened simply to RLE.  (See what we did there?) 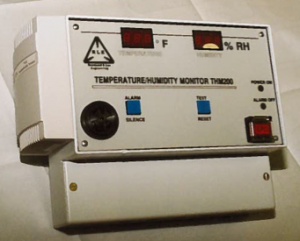 With the right people in place, it wasn’t long before RLE put together, at the request of a customer, their first design: a humidity and temperature sensor. This too would become a hallmark of the company: a responsive design process.

Emboldened by their success, they moved into their first complete device: a spot detector for leaks.

Seeing the spot detector in use led them to the conclusion that there was still a gap in traditional spot detection systems and they found a way to fill it. The RLE team pioneered an open weave leak detection cable that provided more thorough protection against leaks. 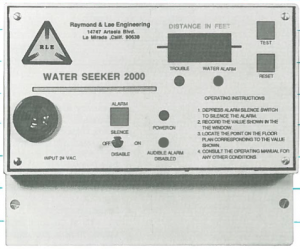 With the right people and the right designs, growth was inevitable. Over the next six years they were able to move from the Raymond family house into a 1200 square foot office in La Mirada, California.

They added more employees and their product line grew to include the distance-read Water Seeker 2000 and zone leak detection in the Water Seekers 3 and 6.

They even attracted their share of noteworthy customers. Don likes to tell the story of the mysterious ‘Jack Daniels’ who contacted them for a leak detection system in what he claimed was a satellite office of the CIA.

Fraught with excitement though they were, the early years did afford the Raymonds and Roy a chance to stop and consider what was important to them as a company, eventually articulating the values that would shape the company for the years to come.

In addition to the dedication to reliably designed environmental monitoring systems, our founders settled on three more characteristics that would define their choices for the company.

RLE Technologies makes it a company policy never to settle for good enough. There are always ways to do things better.

(You’ll see what we mean. The next 22 years paint a very clear picture of these values in action).

The times, they are a-changin’

By 1992, RLE was doing well but California had become a less desirable location. New labor laws and overpopulation made the business environment tough. The Southern California riots made the living environment unstable.

And then Colorado came a’knockin’.

They weren’t just looking for a good place to set up a business; they checked out schools and crime rates. They were looking for a place that RLE and its attendants could call home. 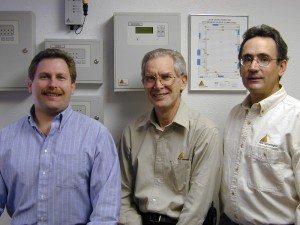 Then the state of Colorado began actively recruiting RLE, offering economic advantages. Roy’s brother already lived in Colorado and their research turned up a little gem of a city called Fort Collins.

Colorado – and specifically Fort Collins – won. They loved it.

The Raymonds Jr. and Sr. and Roy gathered their families and made the move, ready to start anew and build RLE Technologies into the company it is today.

They’ve never regretted it. They fell in love with Fort Collins and threw themselves into building a life here with gusto.

The first step to fully acclimating to Colorado was to start hiring Coloradoans. They connected with Roy Watson for his electronics and board assembly expertise, setting the company precedent for hiring the right people and making them a part of the family.

As with anything that’s been around for so long, the company has experienced its share of successes, failures, and the grey areas in between. And with each up and down, we’ve developed some of the qualities that are a quintessential part of growing up. 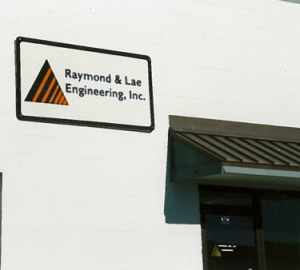 On Roy’s first day in the new facility on 208 Commerce Street, part of the roof blew off, completely blocking the front door before he could get inside. With a sigh and grin, he found a new way. (Which is a poetic way of saying he went around the back).

And, for example, the customer who called in a panic because an alarm was sounding on the fifth floor of his facility and he couldn’t see any signs of a leak, taught us to offer service with patience and grace and occasionally waders. (As it turned out he’d misread the display and when the elevator doors opened on the fourth floor, he ended up with uncomfortably damp socks).

Always there were lessons to be learned.

Not surprisingly for a company that started as a family business, RLE has learned over the years the value of finding the right people and treating them like family.

The economic downturn of 2001 meant letting people go, even people who were really good at their jobs. We felt the pangs of that in the years that would follow. We did better in 2008, managing to hang on to personnel, despite another dip in the economy.

Up until very recently, the average employment time of RLE employees was 12 years. The only reason it’s gone down is that the company’s recent growth has necessitated a handful of new hires in key positions. 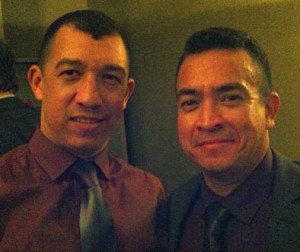 And we expect the average longevity to keep climbing. We believe our whole team is like a family.

There are no glass corner offices or false divisions; all the executives are hands-on and willing to help. In times of need, the founders shared office space and went without paychecks, bootstrapping the company until things got better.

Holiday parties are family events; one year Don Sr. handmade wooden pens for each employee. During the days of shared offices, pranking was common – we leave these mostly to your imagination but for these words: rat trap, rubber snake – and the lunch table was placed in the manufacturing area to make sure everyone could be involved.

This painstaking awareness of the people involved, the sacrifices you make for family, has made the company’s success all the sweeter.

“It’s like one of your kids, growing pains. Building it slowly, it’s satisfying,” Don says.

At RLE, we’re rightly proud of our products. Over the years, we’ve figured out what is important in manufacturing and consequently, we make high quality, innovative environmental monitoring equipment.

And we know that these are the same product lessons that everyone waxes lyrical about, but at RLE we apply them to everything we do in very real ways.

At one point, we looked into diversifying, doing some telecom work, playing with a high-end software division. It required an entirely different creation process and marketing tactics.

In the end, we realized we were putting a lot of effort and attention into a side of the business that was too far removed from the important and money-making products.

We looked back at our roots, at where we’d come from, and decided to refocus on what we were best at. We sold that division to better suited hands and concentrated on our core competencies: making the very finest and most innovative leak detection and facility monitoring systems.

We build and assemble most of our own products here in the USA, from components also made in the U.S.. We are rigorous about quality control.

Learned originally from Ball Aerospace and borne out by further experience, our emphasis on quality has had the pleasing effect of longevity. Our tech support is frequently busy with fairly old products. We still get calls from people with the 20-year-old PGP Power Guard Plus who don’t want to replace it. They want us to re-calibrate it instead.

Our insistence on quality plays out in another way, too. The best way we’ve found to do things right is to match the equipment to the environment.

We don’t believe in retrofitting existing products to meet new needs. Though we build our products for flexibility, we also build them from scratch specifically for the situations our customers encounter.

Having a solid foundation of products is good, but ignoring new technologies leads to stagnation.

For example, we were proud of our original open-weave fluid sensing cable. It’s a good design and many companies still use it. But in 2000 we patented an even better cable that overcomes many of the false alert and dirt interference issues that the open-weave cable couldn’t.

The world is ever changing, introducing new technologies and creating new expectations in consumers. We understand that it is imperative to grow with the times.

It is that understanding and our commitment to our people and our products that will guide RLE’s path in both the near future and the far.

Take nothing for granted 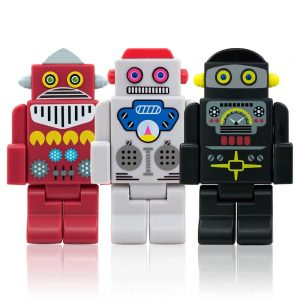 In 2014 and beyond, we are taking a back-to-the-beginning approach. We will be reassessing our foundational elements – our core values and processes and assumptions – to see how they can be redesigned and rebuilt in light of a new day.

We’re excited by the new vistas opening up in the world of automation and how that will affect our products and processes alike. (We solemnly swear that we will not create sentient robots hellbent on world domination. At least not on purpose).

We’re also going to be casting a critical eye over all existing products, looking for ways to meet the increasing demand for simpler, more intuitive user interfaces and experiences. There are so many mobile and web capabilities that weren’t around when we created some of these products; we’re ready to meet the challenge.

By going clear back to our roots, we’re looking at ways we can integrate new technologies and innovations that will allow us to lay the foundation for future growth. 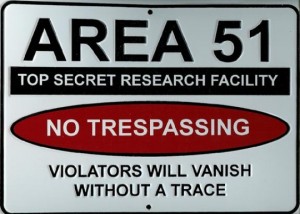 Some of it’s still hidden behind our ‘TOP SECRET – KEEP OUT! (Yes, this means YOU, Mom)’ signs, but…keep your eyes peeled.

Here’s hoping that the next 30 years are as satisfying and as much fun as the last 30.

Happy Birthday to us.

Any birthday wishes or advice?

Do you have any stories about the last 30 years of RLE? Memories to share? Stories about products that still work for you after all these years? Advice for the future? Suggestions for what kind of cake we should have? Share them in the comments below.