Sometimes you can see problems before they hit.  Call it what you want – a sixth sense, clairvoyance, foresight – it’s invaluable.  And in no profession is this talent as beneficial as a critical facilities manager.

If you are responsible for a facility with critical equipment and systems, foresight keeps your facility running and your reputation intact.  The simple fact is, you will never be able to predict EVERY threat to your facility. But you can learn from the experiences of others, and put their lessons to work.

The Value of a Broad Vision

Marcus McCutchen is one of those facility managers that has benefited from great foresight.   As director of the University of Northern Colorado IT Telephone Services Department, he has anticipated and avoided many potential threats that could easily have brought the entire campus computer and phone network to its knees. And beyond the obvious hard costs of downtime, it’s his reputation on the line if things go south.

Lucky for the staff and students at UNC, McCutchen has a whole-facility view of his systems.  He knows equipment has vulnerabilities, and redundancies are necessary.  But more importantly, he looks beyond the equipment itself, and considers the environment that surrounds his equipment.

Upon looking around his facility with a critical eye, McCutchen came to RLE with two vulnerable, yet critical locations.  His first site was the telephone systems room.  It’s the nexus for all phone services on campus, and is located in the basement of Gray Hall.  McCutchen had done his due diligence, and had tagged the potential sources of water in the room.  It’s cooled by a water-cooled air conditioner, and one peek into the drop ceiling showed an array of water pipes.  Water threats from above the equipment: check!

Then he took a look at the floor.  The room itself had a floor drain.  If you’ve got a room with a floor drain, it’s there for a reason – water’s a real possibility on the floor of that room.  To add insult to injury, there had previously been a sewage backup from that very floor drain.  Water threats from below the equipment: check!

Then McCutchen moved onto the second room he needed to protect: the computing control center located in Carter Hall.  This site is the heartbeat of the campus, and encompasses all critical data networking, servers, and IT services.  The most critical threat in this room is the water pipes hidden in the drop ceiling.  Since they feed the water-cooled air conditioning system, they’re transporting water all the time.  And since they hang suspended above all the servers, switches, and networking equipment, they’re a disaster waiting to happen.

Know What You’re Looking For Before You Start the Search 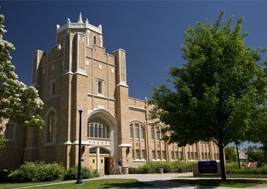 When McCutchen called up the experts at RLE, he had a clear set of requirements.  He needed a system that was proactive – he didn’t want to clean up a big mess, he wanted to know about a tiny leak, so he could intervene and resolve any problems in their early stages.

Next, he needed a system that was cost effective.  The whole reason he wanted a leak detection system was to avoid the major expense associated with a leak, but there were still budgets to consider.

Third on his list of priorities was a system he could easily use and install, from a company that provided good technical support.  Let’s face it, a system that requires a service call every time you want to tweak something is an absolute hassle.

And finally, McCutchen was looking for a company filled with knowledgeable people.  He needed well informed sales representatives to make sure he received the right products the first time.  He wanted to work with a company that communicated clearly and promptly, and answered questions in a timely manner. After all, if you can’t get a quick answer from sales, can you expect to get one from support when you need it?

After researching the options, Marcus concluded that RLE Technologies had what he needed. And after one conversation with Cam Rogers, RLE’s Director of International & Western US Sales, Marcus was convinced he had come to the right place.  Rogers guided him toward a SeaHawk/Falcon solution that would not only monitor both rooms for leaks, but also notify McCutchen and his staff when a leak was detected in either location.  And knowing every second matters, he made sure McCutchen received his quote and subsequent equipment as quickly as possible.

Just as important, RLE’s leak detection systems were very economical.  They offered a wide variety of controllers and solutions that could be tailored to any size facility and any size budget.  This enabled McCutchen, with Rogers’ assistance, to design the perfect protection at the perfect price.

The UNC team wanted to install the system themselves, and found the RLE products just as user-friendly as described.  Since the UNC team works with cable on a daily basis, the SeaHawk Leak Detection cable was a great match for them.  McCutchen appreciated the flexibility of the SeaHawk cable, and placed it directly around the air conditioning units and critical servers, along the floor drains, and tied it to the pipes in the drop ceiling.

The team then linked together the leak detection systems in the two Halls, so they could monitor both facilities through one centralized controller, housed in Carter Hall.­

The RLE solution provided the team with a multifaceted approach to leak detection monitoring.  McCutchen finds the product, “Easy to manage.  I like that the system is web accessible.  I can pull up the web interface and monitor my own leak detection system without calling the manufacturer.  It’s nice to be able to see it all online.”

McCutchen has also established a variety of additional parameters for leak detection notification via the controller.  Depending on where ­­and when a leak is detected, text messages are distributed to a variety of cell phones.

And Then It Happened 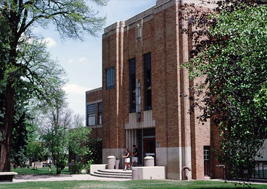 Once the system was installed and fully operational, an unexpected leak in the telephone switch room put it to the test.  RLE’s system detected water, and the controller issued an alert.

McCutchen checked the area above the drop ceiling, and noticed some dampness on the cable and on one of the ceiling tiles.  He notified the campus plumbers, who could not identify an immediate leak.  McCutchen’s persistence, and faith in his leak detection cable, urged the plumbers to further examine the situation.

Ultimately, they determined that there was a crack in the floor sink in the custodians’ closet which was causing a leak – directly above the long distance recording equipment.

“The nice thing was,” notes McCutchen, “We could identify the water issue, and the plumbers could find the location of the problem, even though we couldn’t see any actively leaking water.  It could have been disastrous over time, but fortunately we got to it early.”

Are you concerned about what a water leak could do to your facility? Our Leak Mitigation Checklist will help you identify potential leak sources in your facility, and even help you consider sources you may not be able to readily see (maybe your staff will think you’re psychic!).  We even have a User Guide for said checklist that will guide you through and explain the hidden and visible threats in more detail.

And if you need a little extra help?  Like McCutchen learned, the staff at RLE is experienced, skilled, and knowledgeable.  Give us a call at 800.518.1519.  We’re always happy to help.